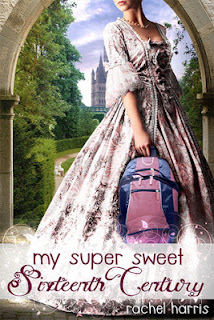 On the precipice of her sixteenth birthday, the last thing lone wolf Cat Crawford wants is an extravagant gala thrown by her bubbly stepmother-to-be and well-meaning father. So even though Cat knows the family’s trip to Florence, Italy, is a peace offering, she embraces the magical city and all it offers. But when her curiosity leads her to an unusual gypsy tent, she exits . . . right into Renaissance Firenze.

Thrust into the sixteenth century armed with only a backpack full of contraband future items, Cat joins up with her ancestors, the sweet Alessandra and protective Cipriano, and soon falls for the gorgeous aspiring artist Lorenzo. But when the much-older Niccolo starts sniffing around, Cat realizes that an unwanted birthday party is nothing compared to an unwanted suitor full of creeptastic amore. Can she find her way back to modern times before her Italian adventure turns into an Italian forever?

How would you feel if you stepped into a Gypsy tent to get your tea leaves read, and walk out to 16th century Italy?  The author handles most of the obvious pit falls of having no family, and not speaking Italian by having her immediately recognized by her aunt and uncle, and spontaneously understanding Italian.  Normally this would annoy me, but it was written in a way that made sense. It is also a true YA book.  There are few chaste kisses, and some cheesy pick up lines (which I am sure sound sexy as hell in Italian), but it is completely appropriate for young readers.  That being said, it was still sophisticated enough to hold my attention.
There were some 90's television show references that made me laugh.  When Cat first realizes she has been transported to 16th century Italy she thinks about the show Quantum Leap.  I have seen every episode, at least twice, so I started to imagine Sam and his handy calculator of destiny.  I, personally, love books written for teens that still appeal to adults.
The ending did bug me a little, don't worry I won't give it away.  There was a little bit of a cliffhanger, and the issue with the devastatingly handsome Lorenzo was only partially wrapped up.  It left room for a sequel, but I am not sure the author has plans for one.

Update: The author just informed me the sequel will be out in August and is titled "A Tale of Two Centuries"