Jackson is always considered the 'softie'. He's the first to help people out when they're in need. He's President of the Hell's Knights and he figures it's about time he shows the world how much of a sinner he can be.
Serenity has a dark past. Secrets haunt her and she has no way of escaping them. Hogan is the only family she knows and life with him is brutal. And it's about to get worse.
He sends her on a mission.
On a mission to destroy the Hell's Knights and the Heaven's Sinners.
Can she pretend with a club she doesn't know?
Or will she betray Hogan for the man she's falling in love with?
Contains one M/F/M scene. 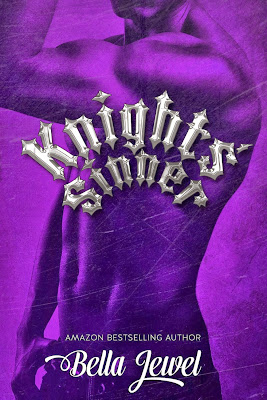 3.5 Stars
OK, so after waiting for ages for Amazon to get their stuff together and publish this, alright I am being melodramatic it was only like an extra day, I finally got this hot little number on my iPad.  I have loved all three books in the series, this one was probably my least favorite, but it was still good. I would recommend it if you have already read the first two.  While the other two focused a little more on the dialog and connections, this was more sex driven.  But it was hot and well written sex I will have to admit.  In some books when an author tries to write a M/F/M scene I end up feeling like I need a white board to draw out what is happening because I don't know what is going where.  Bella nailed it.  There was no confusion, and I was not left asking myself "Did anyone wash their hands after that before starting in on something else", or "that's going to cause an infection"
Well done Miss Jewel, you have once again delivered and I can't wait to read all about the Pirates!!!