Knight and Day by Kitty French

“Listen, Kara…” Dylan topped up their champagne glasses in the silence that followed Lucien and Sophie’s disappearance. “I think we may have got off on the wrong foot, and for my part in that, I’m sorry.” He handed Kara her glass and picked up his own, turning his body towards hers on the bench as he settled back down. The top couple of buttons on his dark shirt were open, and Kara found her eyes following the tanned column of his neck down and wondering what he’d be like if he lost the shirt altogether. Balls. She closed her eyes and brought her glass to her lips. She didn’t want to think that. Don’t think it, don’t think it, don’t think it. Maybe if she said it three times in her head something magical would happen and he wouldn’t be so attractive when she reopened her eyes. Well, that didn’t work. In fact, if anything, he looked sexier still, because he was watching her, waiting for her. “Are you waiting for me to apologize too?” she asked, placing her drink down. “Do you feel like you need to?” He was half school teacher, half sex god, and for some reason Kara found herself ready to be thrown over his knee and chastised for her sassy mouth. Oh Lord. This was going to go bad. Champagne swilled in her veins, and there was no stopping the words from leaving her lips. “No. I actually feel like sliding over there and unbuttoning your shirt.” Dylan’s expression went from lazy amusement to round-eyed surprise in five seconds flat. Surprise laced with arousal. “Which is why you should leave right now,” Kara continued, aware that she’d said too much, as always. Her big mouth had got her into all sorts of trouble over the years, and it would seem that this was destined to be another of those times. She watched him swallow hard and wanted to trace her index finger down his Adam’s apple. He watched her watching him. “Well, that’s an unexpected development, English.” “You’re telling me,” she said. “Leave. Please?” Kara maneuvered herself off the bench and stood to allow him room to get out. “Should I finish my drink?” “Nope.” “I could take my shirt off?”

Excerpt from Knight and Day 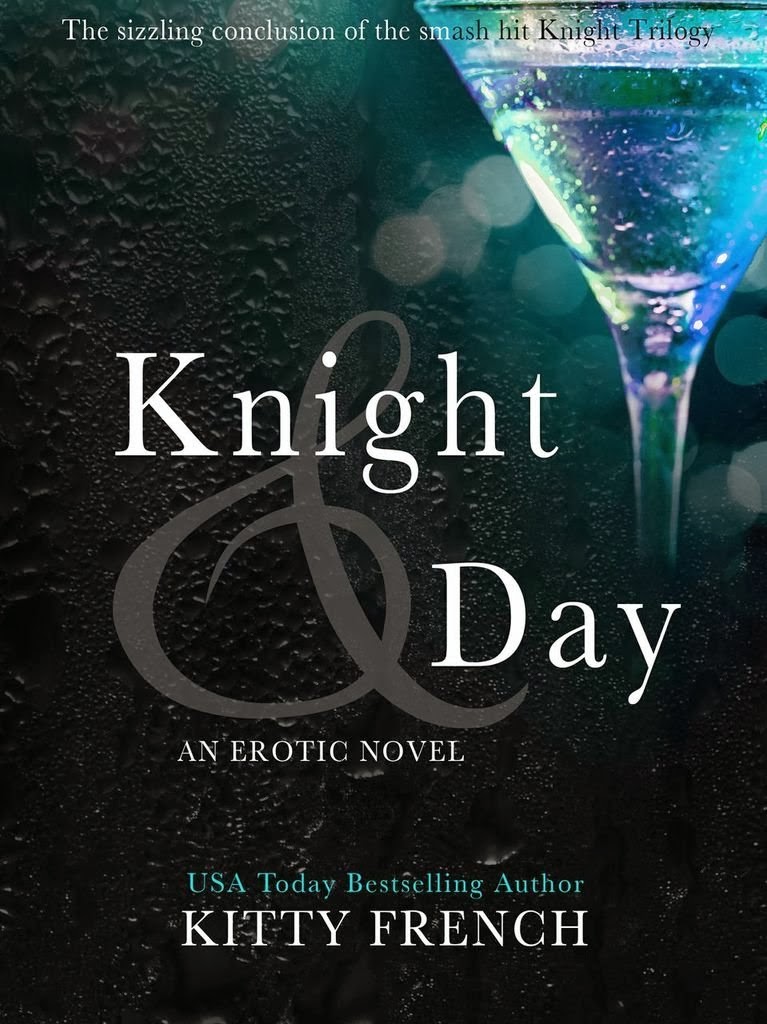 This book was an unexpected surprise as I thought it would end with Knight and Stay.  I was completely happy with how the second book ended, and thought that was the end of my lovely Viking Lucian.  Then the best news ever, she was writing a third book.  When I found out it was Kara's story, that made it even better.  As with the previous installments there is tons of action, secrets, hot scenes, and tender moments in a sex club of all places.

Dylan is a down and out American living on his last dime in Ibiza. Luckily Lucian Knight knows someone worth his time when he sees them.  From the first moment he meets Kara, sparks fly.  I loved all the tension between them.  Unlike with Lucian and Soph it is Kara who seems to be in charge.

Kara has been stood up at the alter, and is sick and tired of lying men. She has decided to throw herself into her work, lucky for her Lucian hires Dylan.

Bromance- Who would have thought that Lucian would need a guy pal, but it works.  I love that they cover for each other, and he protects Dylan.

Lucian and Soph- You get to see more of their life together with the family they have built. The fact they were not just background or references in the book was nice.  There are lots of surprises and swoon worthy developments for these two in the third book

Steam factor is off the charts in this one.  The first two were hot, but this one takes it to a new level.  Well done Miss French, and keep them coming.